CoreBone developed and produces a bioactive coral-based bone graft – an efficient and natural alternative to current human and bovine bone derived grafts,that lead the global 4B$ orthopedic and dental markets.

CoreBone has developed new innovative technology for the production of bio-active coral based grafts, which are a safe, high quality and cost effective alternative to the human and animal-derived bone grafts currently used in the orthopedic and dental fields.

The company has a registered patent in the USA, Europe, and Israel for the process of inserting bioactive minerals into corals while they grow - a unique procedure that encourages new bone growth around the coral implant, giving CoreBone a competitive and clinical advantage.

CoreBone is Breaking Into the Chinese Market

Over the past year, the company's CEO has visited China several times and met with leading medical companies. The Chinese market has a huge growth rate, with high potential and characterized by relatively low competition. In addition, coral-based products are of great interest and appreciation in China. CoreBone received excellent responses from leading dental and orthopedic hospitals, and as a result, has received several proposals for cooperation in China. The company is currently in advanced negotiations for the investment of a significant amount and the creation of cooperation with leading players in China.

An Innovative Solution for a Growing Market Worth $ 4 Billion

The dental and orthopedic market is estimated at $ 4 billion annually and is controlled by products originating from humans or animals. Most dental patients who undergo bone grafting procedures are not necessarily aware of the fact that the product implanted in their mouth is actually made of cow (bovine), pig (porcine) or even human bones. However, awareness to the use of safe natural products is rapidly increasing and the use of animal products is declining. CoreBone offers a safe  quality product, without the limitations of the human /animal derived products, at a competitive price, and is working hard to penetrate international markets and gain significant market share through its advanced products.

Multi-Year CE Approval for Marketing in Europe and Israel

The CoreBone product has regulatory approval in Europe and Israel for dental and orthopedic use, including CE certification for distribution in the European market, which has been renewed for an additional three years. In addition, the product is approved by the Israeli Ministry of Health and is currently being registered in Taiwan through a local distributor. The product was first marketed in Israel, France, Poland and Romania, for feedback and clinical follow-up. The company recently received product distribution requests in Spain, Italy, Australia, India, Argentina, Chile, China, Japan and others. The company scheduled to meet with distributors this March in Germany, at the world largest dental fare, and expect sales in these target markets to start later this year.

CoreBone, which has come a long way, is supported by the Israel Innovations Authority and has also received a significant investment from Trendlines, the leading bio-medical incubator in Israel, specializing in medical device and agro-tech investments. The company has raised a substantial amount of money from the Israel Innovations Authority, Trendlines, entrepreneurs and private investors from Israel, the United States, England, Singapore and Poland, and completed a successful crowdfunding round through ExitValley a year ago.

Following the success in the dental field, with over 2000 successful transplants and excellent clinical data, Corbonne is expanding its distribution network and penetrating new markets. The company is currently starting a pilot project in the orthopedic-oncology department at Ichilov Medical Center, which will be used for clinical research, with the purpose of replacing the existing human-derived products for orthopedic transplants.

Graft materials are used to create bone volume to stabilize and anchor implants. The bone replacement market, derived from the dental and orthopedic implants market, has been growing steadily for several reasons:

Today's graft materials originate in human bones and are the preferred clinical solution. However, this alternative contains several limitations:

Graft materials derived from animals, especially cows and pigs, are common in the dental field. Due to the risk of transmitting resistant viruses such as mad cow, these implants undergo a high heat treatment of about c1000°, after which they lose their biological ability and become a ceramic substance that does not remodels (replaced by new bone as it grow).

In the market, there are also graft materials made from synthetic materials, but they are of low strength and tend to dissolve in the body at a faster rate than the bone building itself. These are often considered the least favored solution.

For these reasons, there is a strong need for a strong and effective product at a reasonable price, with properties similar to bone properties, which will enable maintaining bone volume through an efficient transition process. CoreBone answers this need with a bone-like product in terms of structure and composition, but not produced from the bone of a mammal, with all the risks included. CoreBone grafts are made from corals that are grown (cultured) in a closed, monitored laboratory environment (coral farm). Patented technology embeds bioactive minerals (e.g., silicium) into the skeleton of selected coral types during their growth process, utilizing their bone-like qualities and adding bioactivity for accelerated bone healing and better bone connectivity. As a result, the CoreBone graft material offers the same bone-like qualities as organic material (human-derived) without the associated biological risks.

This is a natural alternative to products derived from human or animal origin, with bioactive components that even encourage natural bone growth.

CoreBone's product, innovation, and uniqueness have been received very well so far by field experts and opinion leaders. The common opinion is that the CoreBone product has a variety of unique advantages over existing solutions: CoreBone is the story of two worlds that combine in perfect synergy, behind which stands a group of wonderful staff members, each of whom is a world renowned expert in their field. The team members successfully combine their knowledge and experience in the worlds of bone research and marine biology to create a breakthrough product that revolutionizes a market with great potential.

Led by its team of experts, the company has developed a coral-based bone replacement for cases of injury, disease and transplant support, which is an effective, safe and eco-friendly alternative to the leading products produced today by human or animal bones for the risks involved.

In 2005, the Kyoto Protocol on Global Warming was signed, stating that the coral reefs are becoming extinct at a high rate and are expected to disappear by half a century. The convention stated that it is forbidden to harvest and trade corals. Following the convention, the CoreBone team began exploring the use of coral reefs. The team was greatly strengthened by Prof. Yitzhak Binderman, a world expert in mineralization and biology of bones, who was formerly an advisor to INTERPORE, which developed the first coral bone substitute.

CoreBone's idea of growing coral for this purpose, in a closed system while controlling the quality of water and corals, has been combined with the knowledge and experience of bio-activation - improving biological abilities and bone growth encouragement - a topic that Prof. Binderman has dealt with in recent years. The project was joined by Assaf Shaham, who has been involved in coral farming at Moshav Ein Yahav in the Arava. This is how CoreBone - the only company currently growing coral as a medical product designed for transplantation - was established.

CoreBone launched its products in the dental market in 2017 at the IDS exhibition in Germany, and from the beginning its unique solution has received much attention. The company began marketing its products in Israel and Poland. Initially, since the beginning of marketing, the Company focused on collecting user opinions and clinical data. These data were recently publicized in a clinical catalog published by the company, which includes a follow-up of over a year. The opinions we received were excellent and parallel to our product for the world's leading product - which originated from a cow, is not absorbed in the body (a requirement of doctors in many cases and basic conditions for the use of orthopedics). 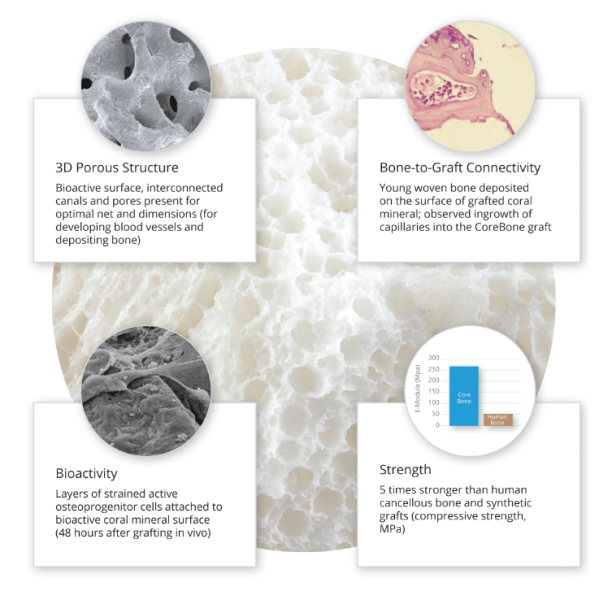 Prof. Haim Tal, head of the transplant Department at Tel Aviv University and former head of the School of Dental Medicine, joined the company as a clinical and scientific consultant.

Today, the opinions we have gathered, the clinical data and the marketing material enable us to support the distributors in introducing a new product into the market, and we are prepared to expand marketing and distribution.

The company's goal and vision are to make CoreBone products the market leaders, both in dental use and in the orthopedic field, and continue to develop additional unique products for these markets.