The AI technology that protects our loved ones

EyeKnow is developing innovative technology, which detects and helps prevent abuse between caregivers and elders. The technology is based on video and unique AI algorithms, which helps a crucial social need, and addresses markets valued at billions.

Invest in the technology that could prevent the next tragedy

In order to prevent horrible events such as Yasmin Vinta’s death by a kindergarten assistant, or convicted childcare abuser Carmel Mauda, which have shocked Israel in recent years, along with repeated reports of elder abuse by caregivers, EyeKnow has decided to develop a life-saving technology that can detect, with high-precision, aggressive behavior and violent incidents, and prevent abusive incidents before they occur. Unlike current violence detection systems, which are unable to detect violent acts at the sensitivity level required in this setting, EyeKnow’s platform is designed to detect aggressive behavior such as strong arm pulls, forcefully seating someone, violently feeding someone, and more.

The company is working in collaboration with one of the top 3 largest ISPs in Israel, to launch its service to the public in 2022, and has also signed a cooperation agreement with leading global hardware manufacturer NVIDIA, as part of the NVIDIA Inception program.

EyeKnow's tech represents unique IP and with this funding the company intends to register 2 innovative patents, covering the ability to identify aggressive movements towards the helpless on which the technology is based, along with a patent for profiling caregivers, who might be prone to committing acts of violence. A committed and dedicated team, with vast experience in high-tech

EyeKnow is led by a team with a clear social vision and extensive experience in the realms of tech, who is fully dedicated to this important cause, utilizing technology and the powers of the algorithm, in order to save and improve the quality of life of helpless individuals, in Israel and worldwide. Investors in the company so far include Techstars, an American accelerator program, the third largest of its kind in the world, and this current campaign is meant to allow the completion of the product, as well as market entry into the private and institutional care sectors, valued at billions of dollars annually. An innovative solution for a growing market with huge potential

The company's tech is aimed at large-scale private and institutional care markets: According to estimations, there are around 113 million seniors today, who receive care through professional caregivers, representing a market potential of billions of dollars each year, of which around 81 million live at home and require help, while others live in elderly or nursing homes and geriatric centers. Additional markets include the sector of child care in private or public daycares, including kindergartens and daycare centers worldwide. The market in Israel includes around 2,100 daycare centers and 3,600 nurseries, as well as the global education market for children with special needs (In Israel, about 3,000 daycares and 400 schools). The technology can also be potentially used in the future in other markets (prevention of violence in public spaces for the use of municipalities, schools, prisons, hospitals, police stations, etc).

In Israel and around the world, we find ourselves too often shocked again by the news of yet another case of child abuse, such as the Carmel Mauda story that has shocked has the nation, or the death of baby Yasmin Vinta by her caregiver, along with more horrific stories of repeated elderly abuse, such as in the case of violence in the Neot Kipat HaZahav nursing home in Haifa, a few years back.

Social, demographic and technological changes that have taken place in recent decades, worldwide and in Israel particularly, have led to a steady increase in the amount of helpless individuals, on both ends of the age spectrum: a natural increase in the elderly population, and on the other hand a "Baby Boom" - a massive increase in the number of infants aged 0-3, who spend most of their early days in nurseries and daycares, mostly privately owned, where their safety and wellbeing are left in the hands of strangers, with no actual means of monitoring what happens, or any kind of parental control.

Research has shown that these age groups are the most likely to suffer from improper behavior, violence and neglect by their caregivers, due to the inability of infants or the elderly to protect themselves and/or report what is done to them, which makes them more vulnerable than any other group, to risks to their wellbeing and safety.

According to estimates, 1 out of 5 elderly people in Israel experience some form of violence by caregivers. Worldwide, according to statistics by the World Health Organization, 2 out of 3 caregivers have admitted to having used violence towards the elderly in treatment facilities. The organization has also reported that 15%-30% of seniors in nursing homes or receiving home-care experience verbal or physical violence by caregivers. Causes to this harsh phenomenon include a nearly complete lack of means of supervision, leaving children and seniors, as well as their families, vulnerable and helpless.

Having to physically arrive at care facilities, to examine their compliance with regulation, is a major problem which prevents authorities from being able to continuously monitor this compliance, and allows for large "windows" of possible violent events, which go unseen. A survey conducted by EyeKnow, among children of elderly parents in need of care, has found that violence by the caregiver responsible for the parents' wellbeing, is one of the two biggest concerns that worry them the most.

A survey conducted by the company in collaboration with survey expert Geocartographia, has shown that around 40% of those surveyed have said that the EyeKnow service is relevant to them, a number which rises to 47% among those who have a close elderly family member or are over 70 themselves, while 71% find the technology to be innovative and unique, compared to current solutions: Now, for the first time, EyeKnow is harnessing the most advanced technology in order to answer this profound and painful social need. The company is developing AI based algorithms and methods, for identifying, classifying and monitoring interactions between caregivers and the elderly or children under their care, with a main focus on multidisciplinary algorithms, pre-designed to suit diverse monitoring and control systems, for use among varied populations. 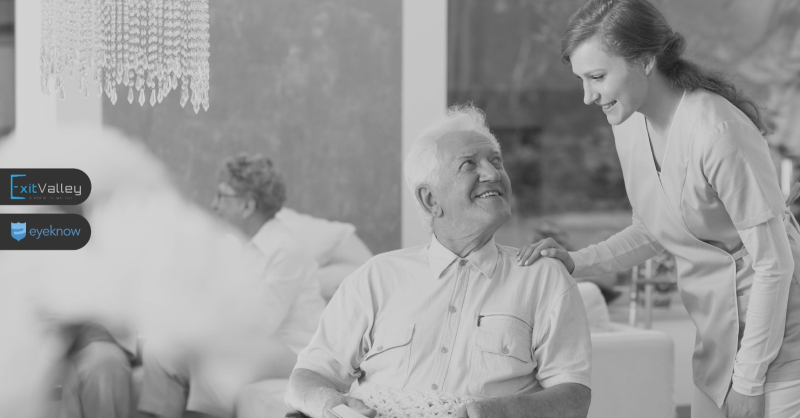 The company and its tech will allow for a new generation of detection, classification and monitoring solutions, based on AI, which have not been possible as of yet, aimed to enhance and boost the monitoring and training processes of professional staff members, in order to protect vulnerable individuals in various care facilities. This, while improving the care experience and quality of life of helpless individuals, and improving the professional efficiency of caregivers and facilities.

The technological solution developed by EyeKnow addresses a profound problem as shown by research - elderly people who experience violence die faster, and continued exposure to harsh environmental conditions and poor quality care is a critical developmental risk factor for children. The technology is designed to help create beneficial environmental conditions, at home or other care facilities, and help protect and enhance all factors related to an ideal emotional, social, and cognitive development - just like every adult, child, and baby deserves.

Additionally, due to the great public pressure in response to abuse reports in recent years, authorities and government entities have finally come to the understanding that a country must provide its helpless citizens, starting with the elderly and infant populations, with high-quality protection and supervision means and environments of care, which are suited to their needs, under continuous monitoring and evaluation, and according to clear and uniform standards.

So far, the company has developed a POC based on a unique algorithm for classifying a limited number of interaction types, between daycare staff and children under their care. The results of this initial algorithm, developed as a prototype, are in an ongoing process of upgrade and adaptation, while the company is also developing and adapting the technology for the elderly care market, to allow identifying, classifying and monitoring interactions between caregivers and patients who are at risk. 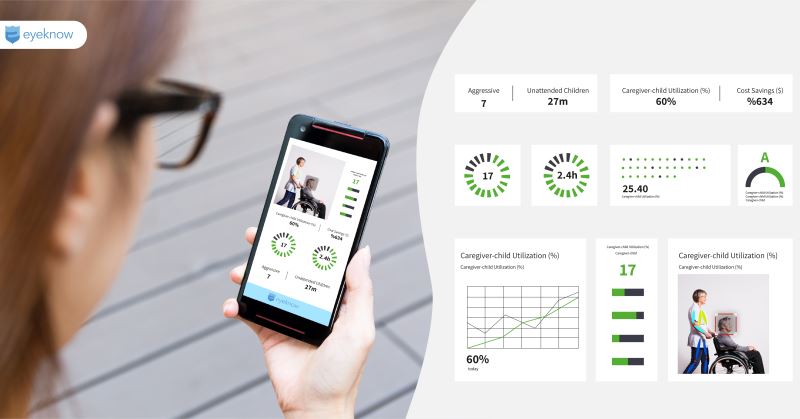 The company's tech is based on AI models which are trained using original and unique videos of violent actions, collected by the company in collaboration with its partners. These models are accessible to customers via cloud and web application. In addition, the company employs a control team, who verifies that system alerts are accurate (using a method called Human-In-The-Loop). This way, the company can provide very high accuracy results, with a rate of nearly zero "False Positives". In the initial phase, the tech will focus on the following aspects:

With this campaign the company intend, among other things, to expand the technology and its capabilities: 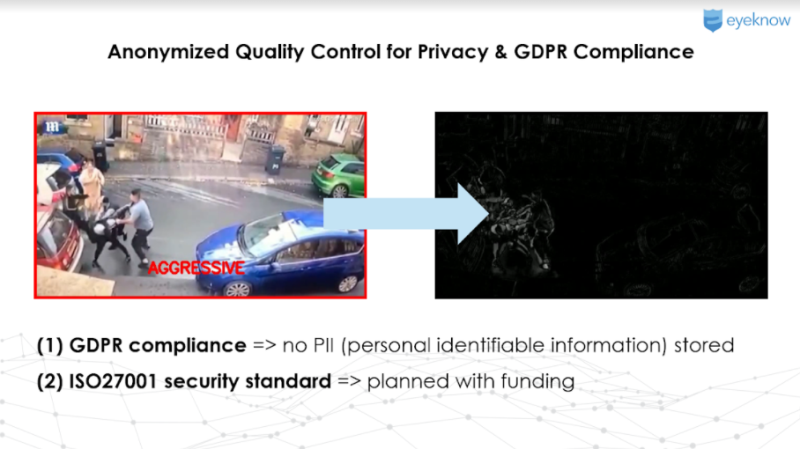 1 . Interfacing with security cams and data collection
2. Processing data and running the algorithms
3. Sending alerts in case of aggressive and violent incidents to clients via an app

In fact, EyeKnow's technology interfaces directly with standard security cameras, and manages the reception of frames with the help of a controlled queue management system. The system has the ability to collect information from many cameras in different locations in the care facility/facilities, while fully adjusting and creating a clear hierarchy of the data stored, without any data loss.

The multi-layered system can connect to any camera. In the next stage, the platform uses deep learning algorithms and models to identify different behaviors, in order of importance and according to the development plan, including identifying aggressive actions, clear physical violence, beatings, kicks, pushes and pulls, etc.

The technology is based on a cloud-based inference system such as Amazon AWS, and also includes internal validation and labeling systems, which allow the team to verify that the events the algorithms identify are in fact real and require immediate attention, before transmitting the processed data to customers. The platform also includes a business intelligence system and a dashboard for convenient monitoring of all information collected, as well as analysis based on the data.

The system will be developed as an app and also as a web application, initially for use by children of elderly people in need of care, or parents of infants for home use, and later on also for use by owners or managers of daycares / nursing homes etc, with a built-in ability to view videos of the events reported by the platform.

EyeKnow intendsto register two exclusive patents, which represent an attractive and important IP, including an element that covers the ability to detect aggressive movements on which the technology is based, along with an additional patent which covers the profiling of caregivers who are likely to perform violent acts. 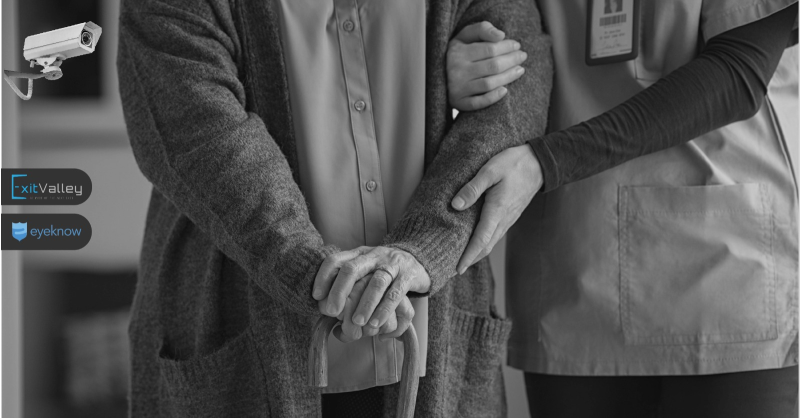