Inspecto is an Israel-based technology startup focusing on food safety. The company‘s innovative technology will allow faster, cheaper, on-site testing for food contaminants in real time, and dramatically reduce the risk of recalls.

INSPECTO has developed a technology that promises to revolutionize the world of food safety service laboratories and laboratory equipment for food safety testing. This unique development is expected to dramatically reduce contaminants in the food we consume and save food manufacturers tens to hundreds of millions of dollars a year by greatly reducing potential recalls. In January 2020, the company filed a patent request in the U.S. and is now raising funds to commercialize its technology and begin sales.

In 2018, Inspecto received a significant investment when it entered the Strauss Food Tech Incubator - The Kitchen - in collaboration with the Israel Innovation Authority. The program also attracted the participation of the Chinese VC Bits & Bites. That same year, another significant investment in the company was made by Seventure - a large VC from France. Other investors include two major Italian food manufacters (Amadori, Cereal Docks), the Italian investment company Digital Magics and an Israeli angel investor.

The current round of funding will include large entities committing significant investments and grants. The company was recently approved to receive two important non-delutive grants: the first - a grant from the Israel Innovation Authority that is conditioned on raising a minimum amount in the current round; and the second, a supplementary grant, also from the Innovation Authority, for a joint project between Inspecto and the Chinese company COFCO.

Strauss also recently announced that it will join this round with an additional investment.

Inspecto has signed cooperation agreements, commercial terms and joint development agreements with a number of leading global companies in the field of food and laboratory testing. The most prominent of these are:

- PepsiCo Strauss: have stated in writing that they will purchase contaminant tests from Inspecto for their joint food factory.

- Merieux Nutrisciences: Inspecto has signed a collaboration agreement of enormous strategic importance with global laboratory company, Merieux Nutrisciences, to use Inspecto's technology in their facilities in Israel - Milouda Laboratories. Merieux, a global leader in food safety and quality services, is known for its acquisitions of other laboratories and new technologies.

- COFCO: China's largest food company has signed a memorandum of understanding and a statement of intent to implement a joint project, in which Inspecto's technology will be adapted to the needs of COFCO's food testing needs.

Since its founding in 2016, Inspecto has won a variety of international awards and grants, including:

Participation in Prestigious Accelerators in Israel and Abroad

The company has participated in a number of significant accelerators, including the MassChallenge Israel program and the Impact 8200 program; in addition, it is the first Israeli company to be admitted to the Deloitte Italy Accelerator Program, which included investments from two leading food companies in Italy and the Italian investment company Digital Magics.

The company's team includes world-renowned experts from Israel and the United States in the field of chemistry and nanoparticles, physics, business administration and business development. Among the company's prominent advisors is Dr. Lili He from the University of Massachusetts - an eminent expert in the fields of food safety and the development of optical tools for detecting food toxins. As part of her research work, Dr. He collaborates with huge companies in the fields of food and analytical tools. According to the 2019 World Health Organization report, 1 in 10 people will get sick from eating contaminated food, with pregnant women and young children at the highest risk level. 40% of patients will be children under the age of five. A major reason for these dismal statistics is the fact that the entire food industry, from the farmer to the consumer, relies on 50-year-old technology for testing contaminants, technology which does not allow for frequent testing on a daily basis. The food industry has a clear interest in conducting as many tests as possible, as one miss could lead to product recall and negative publicity, resulting in losses of tens of millions of dollars and possibly even the destruction of the brand. 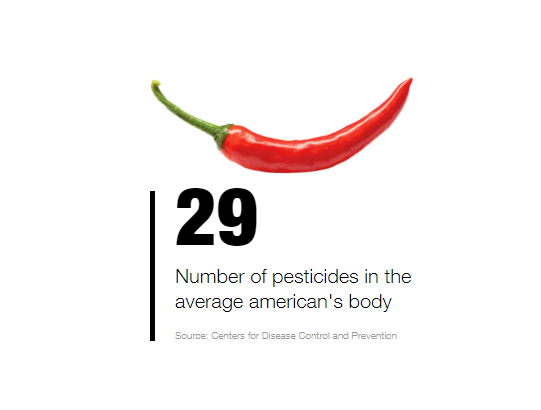 In order to detect toxins in food, technology needs to detect residues of organic matter at extremely low concentration levels (PPB - Parts Per Billion) - a complex, expensive and time-consuming procedure. The existing toxin detection technology (HPLC / LCMS) on which the food and agriculture industries rely, is outdated equipment that can only be operated by professionals in certified laboratories. The cost of the test, and the time it takes to get an answer, limit food companies to a small number of tests. These tests do not allow for immediate decision-making and multiple quality assurance tests. Food manufacturers are forced to choose between storing produce for a long (and costly) time or releasing food to the public without laboratory test results, leaving manufacturers at risk of food safety incidents and recalls. Inspecto is developing a device for detecting contaminants in food that will operate independently of an external laboratory and at a significantly faster speed compared to existing solutions. The company’s groundbreaking technology allows food safety tests to be performed on-site by the manufacturer and returns results within a short time. The test is based on spectral and nanoparticle methods that allow the identification and quantification of toxins at extremely low concentration levels and in accordance with regulatory requirements. The company's vision is to lower the level of morbidity resulting from food contamination. Inspecto's development is based on a combination of two technologies: Raman spectroscopy and Surface-Enhancing Raman Spectroscopy (SERS).

Raman spectroscopy is a well-known optical method by which molecules can be specifically identified and quantified. However, this method alone is not suitable for the detection of extremely low concentrations, as required by regulators around the world regarding toxins in food (PPB concentrations). In order to detect toxins in low concentrations, Inspecto has developed a method to increase the signal of the toxins and thus make them apparent to Raman. This method of signal increase is called SERS, and although it is known in research universities, Inspecto is the first to tailor it to specific toxins that concern the food industry, and in a way that can be commercialized and taken out of the lab.

To date, the company has developed the ability to detect a toxin called acrylamide in food products. Acrylamide is a toxic chemical compound formed in starchy foods when they are baked, fried or roasted at high temperatures (120 ° -150 ° C). With the help of a leading researcher in the field, Dr. Lili He from UMASS, Inspecto is the first company to develop nanoparticles and a "recipe" for industrial use, and today the company is developing the first product (Gen 1) for use in laboratories. The product is based on Inspecto's successful development - the ability to detect and quantify toxins immediately after preparing the sample for testing. Commercially, this product will be sold as a kit in which the company provides all the materials (solvents, nanoparticles, and spectrometers) needed to perform the test.

In April 2020, the company was approved for a government grant to develop the Gen 2 system that will perform the entire test automatically. In this product, the user will insert a sample into the capsule containing the solvents that will prepare the sample for testing. The sample will then be mixed with Inspecto's nanoparticles, and at the last station the mixture will be measured by the spectrometer. This development will allow the product to be deployed throughout the entire production chain and significantly increase the number of tests performed. 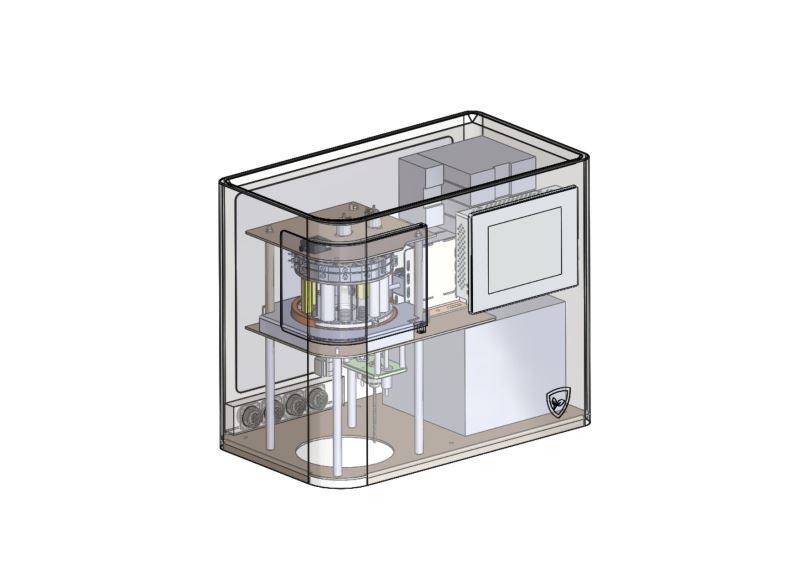 Information analysis based on location, production, season, source of raw materials and more, which will enable food companies to better manage the chain of suppliers and production and serve as an advertising tool for the consumer.

Conventional laboratory equipment (HPLC / LCMC) does not provide "yes / no contamination", nor quantity of contaminants information. The instrumentation emits a series of graphs, which are decoded by the technician who operates it. With Inspecto, this translation is done instantly and transmitted from the graph of the spectrometer to the interface (the application), allowing the user to make an immediate decision. for example - whether to continue packing the product now or whether to stop and inform the plant manager. 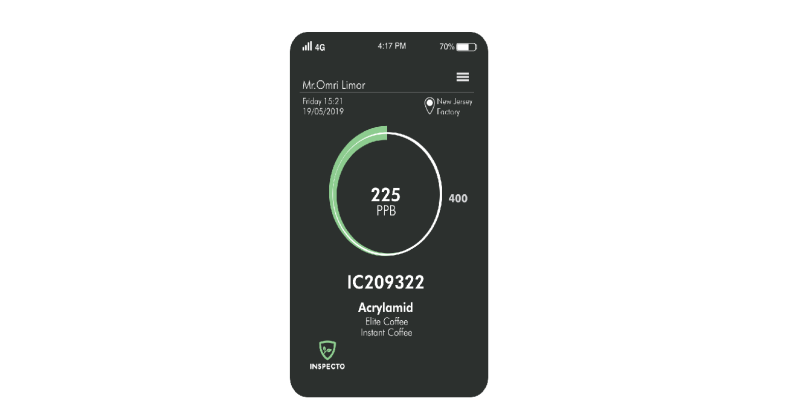 A lot of information is collected while the test is being performed, such as the type of food, the type of toxin, the test time, location of the test, batch number, batch source and more. The gathering of information allows the company to perform further data analysis.

When Inspecto reaches a mass of data, the company will be able to offer a number of advanced services -

1. The company's customers will be able to receive analysis of toxins by location, time of year, source of raw materials, etc., in order to improve and streamline the operation and minimize exposure to toxins.

2. Other platforms will be able to access the company's information through the API, so that they can use it for a fee. For example, many companies today testing the freshness of products have already approached Inspecto to integrate with existing information (their technology is unable to detect substances at low concentration levels).